IRVINGTON, N.Y. (AP) — This time, the weather gods were smiling on Kerby Jean-Raymond and his label, Pyer Moss. So too were the fashion gods.

Two days after torrential rains and lightning sent guests fleeing for cover and forced Jean-Raymond to postpone unveiling his hotly awaited first couture collection, the sun came out Saturday and the crowds came back. They were rewarded with a hugely imaginative, visually audacious show that blurred the lines between fashion and art as it paid tribute to the ingenuity of Black inventors often overlooked by history.

And so, there was the peanut butter dress — literally, a huge, soft sculpted jar of the stuff. There was a stunning hot roller cape — which was what it sounds like, hot rollers from head to toe. There was an ice cream cone with chaps for the cone. There was an air-conditioning unit, an old-fashioned mobile phone, a kitchen mop.

There was a pastel pink lampshade dress, with beaded fringes. There was a chess board, and a white metal folding chair, and a bottlecap — each costume a sophisticated work of sculpture. There was also a refrigerator with colorful letter magnets spelling out the phrase: “But who invented Black trauma?”

There were also dancers, a rap musician, a string section, and a history lesson from Elaine Brown — activist, writer and a former leader in the Black Panther Party.

Jean-Raymond, whose shows always entwine his ideas about fashion with those about culture, race and society, said in an interview after the show that his goal was “to highlight inventions by Black people and show them in a nontraditional way,” involving 3D construction and sculpture.

All Pyer Moss shows attract intense interest, but this show had even more buzz because Jean-Raymond was the first Black American designer invited by France’s Chambre Syndicale to show a collection during Paris Couture Week — the event was livestreamed, with officials in Paris extending the length of Couture Week to accommodate the rescheduled show.

And the setting was deeply significant: Villa Lewaro, an early 20th-century mansion in leafy Irvington, N.Y., about 30 miles (48 kilometers) from New York City built by Madam C.J. Walker, the daughter of enslaved parents who became a hair-care magnate and a self-made millionaire.

“Madam C.J. Walker’s wealth was more than money,” Jean-Raymond wrote in the show notes. “Black prosperity begins in the mind, in the spirit and in each other. She knew that no dollar amount could ever satisfy the price tag of freedom — that green sheets of paper & copper coins could never mend souls, heal hearts or undo the evil we’ve endured.” 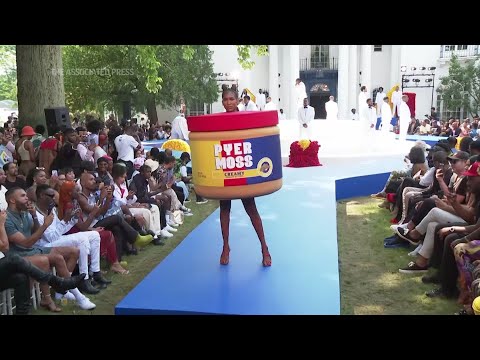 Chartered shuttle buses ferried guests from Manhattan and Brooklyn, and the rescheduled show Saturday included a contingent from the public, adding to the excitement in the air.

It began with a speech by Brown, who gave a history lesson of sorts of the Black struggle for justice in America and asked the crowd, “Where do we go from here? Where does the freedom movement go from here?” She urged the crowd to look past differences and “get back on the freedom train.”

Then came the dancers — men in white, who slowly shed their jackets and eventually their shirts as they accompanied rapper 22Gz performing several numbers, including “Sniper Gang Freestyle” and “King of NY,” while the models walked the circular runway.

Jean-Raymond said he and his team had gone through an exacting and exhaustive process to meet the demands of a couture collection.

“We went through rounds and rounds of design,” he said. “We started with a completely different concept. Then the team went out to Joshua Tree and did ayahuasca together. And then we came back with this concept.

“So it wasn’t just couture in the traditional sense where were sewing up garments,” he said. “There was welding involved and and fiberglass molding. And we made shoes.”

The hair curler outfit alone, he said, took months because “it was just people sitting there and curling real weaves onto hair rollers. You know, the bottle-cap took two months. Every time we made something, we we sat back, we thought, ‘How can we make it better?’ And every time the construction got more complicated.”

Jean-Raymond was relieved to not have to contend with freak weather again on Saturday.

“It’s been a long, long process to get this where we are right now,” he said. “But I’m very happy with the results and that the audience gave us a second chance, after that monsoon on Thursday almost wiped us out.”

Wed Jul 21 , 2021
Visit us at a starbucks reserve roastery or coffee bar, or find starbucks reserve coffee at select starbucks locations. All Christian Dior handbags are exquisitely made to last a long time. street style 2020 fashion trends casual Supermodels are so hot and fashionable all the time. My first look tonight […]